Results computed using numerical methods are inaccurate – they are approximations to the true values. We can represent an approximate result as a combination of the true value and some error:

Given this problem setup we can define the absolute error as:

This tells us how close our approximate result is to the actual answer. However, absolute error can become an unsatisfactory and misleading representation of the error depending on the magnitude of .

If we consider the two cases again, we can see that the relative error will be much lower in the second case.

Significant figures of a number are digits that carry meaningful information. They are digits beginning from the leftmost nonzero digit and ending with the rightmost “correct” digit, including final zeros that are exact. For example:

An approximate result has significant figures of a true value if the absolute error, , has zeros in the first decimal places counting from the leftmost nonzero (leading) digit of , followed by a digit from 0 to 4.

Example: Assume and suppose is the approximate result:

The number of accurate digits can be estimated by the relative error. If

Absolute and Relative Error of Vectors

If our calculated quantities are vectors then instead of using the absolute value function, we can use the norm instead. Thus, our formulas become

Rounding error is the error that occurs from rounding values in a computation. This occurs constantly since computers use finite precision. Approximating with a finite decimal expansion is an example of rounding error.

Big-O notation is used to understand and describe asymptotic behavior. The definition in the cases of approching 0 or are as follows:

But what if we want to consider the function approaching an arbitrary value? Then we can redefine the expression as:

We can use Big-O to describe the time complexity of our algorithms.

So, when we double the size of our our matrices to , the time becomes . Thus, the runtime will be roughly 8 times as long.

Consider solving an interpolation problem. We have an interval of length where our interpolant is valid and we know that our approximation is order . What this means is that as we decrease h (the interval length), our error will decrease quadratically. Using the definition of Big-O, we know that where is some constant.

In some cases, we may not know the exponent in . We can estimate it using by computing the error at two different values of . Suppose we have two quantities, and . We compute the corresponding errors as and . Then, since , we have:

Solving this equation for , we obtain .

It is important that one does not place too much importance on the constant in the definition of Big-O notation; it is essentially arbitrary.

Suppose and . While is much larger than for all values of , both are ; this is obvious if we choose any constants and .

However, it is also true that for any constant

So including a constant inside the is basically meaningless.

Question: What is the function that gives the tightest bound on ?

However, we cannot find a pair of constants and such that:

Thus, we cannot “fit” another function in between and , so is the tightest bound.

One may be tempted to think the correct answer should actually be ; however, this does not actually provide any additional information about the growth of . Notice that we didn’t specify what and were in the inequality above. Big-O notation says nothing about the size of the constant. The statements

are all equivalent, in that they all give the same amount of information on the growth of , since the constants are not specified. Since is very small, it may be tempting to conclude that it is “tighter” than the other two, which is not true. Therefore, it is always best practice to avoid placing unnecessary constants inside the , and we expect you do refrain from doing so in this course.

Algebraic growth/convergence is when the coefficients in the sequence we are interested in behave like for growth and for convergence, where is called the algebraic index of convergence. A sequence that grows or converges algebraically is a straight line in a log-log plot. 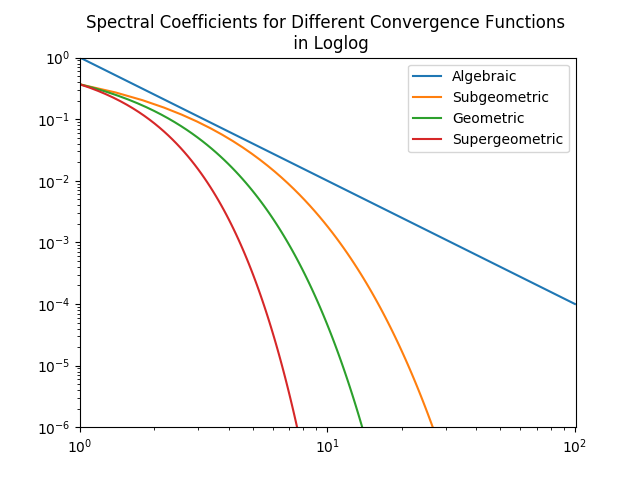 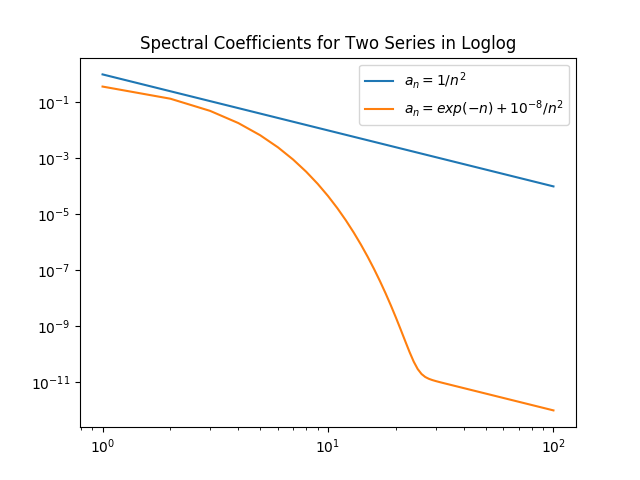 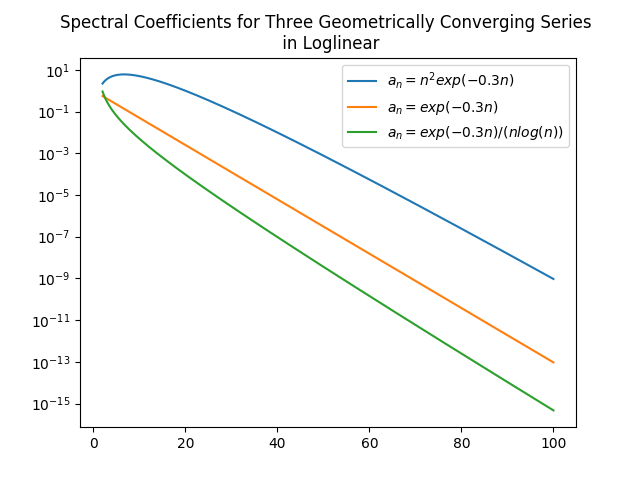 Links to other resources