Minima of a function

Consider a function , and . The point is called the minimizer or minimum of if .

Consider a domain , and . 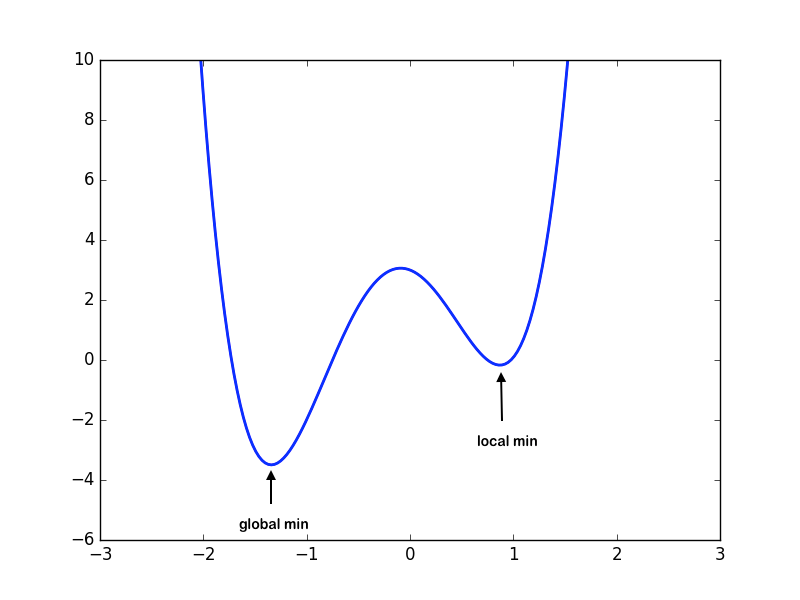 In the case of 1-D optimization, we can tell if a point is a local minimum by considering the values of the derivatives. Specifically,

Example: Consider the function The first and second derivatives are as follows:

The critical points are tabulated as:

Looking at the table, we see that satisfies the sufficient condition for being a local minimum.

As we saw in 1-D, on extending that concept to dimensions we can tell if is a local minimum by the following conditions:

Definiton of Gradient and Hessian Matrix

Given we define the gradient function as:

Given we define the Hessian matrix as:

A 1-dimensional function , is said to be unimodal if for all , with and as the minimizer:

Some examples of unimodal functions on an interval:

In order to simplify, we will consider our objective function to be unimodal as it guarantees us a unique solution to the minimization problem.

For Newton’s method for optimization in 1-D, we evaluate and , so it requires 2 function evaluations per iteration.

Algorithm to find the minima of :

Our goal is to reduce the domain to such that:

We select as interior points to by choosing a and setting:

The challenging part is to select a such that we ensure symmetry i.e. after each iteration we reduce the interval by the same factor, which gives us the indentity . Hence,

As the interval gets reduced by a fixed factor each time, it can be observed that the method is linearly convergent. The number is the inverse of the “Golden-Ratio” and hence this algorithm is named Golden Section Search.

In golden section search, we do not need to evaluate any derivatives of . At each iteration we need and , but one of or will be the same as the previous iteration, so it only requires 1 additional function evaluation per iteration (after the first iteration).

The negative of the gradient of a differentiable function points downhill i.e. towards points in the domain having lower values. This hints us to move in the direction of while searching for the minimum until we reach the point where . Therefore, at a point the direction ‘’’’ is called the direction of steepest descent.

The next problem would be to find the , and we use the 1-dimensional optimization algorithms to find the required . Hence, the problem translates to:

The steepest descent algorithm can be summed up in the following function:

Newton’s Method in dimensions is similar to Newton’s method for root finding in dimensions, except we just replace the -dimensional function by the gradient and the Jacobian matrix by the Hessian matrix. We can arrive at the result by considering the Taylor expansion of the function.

We solve for for . Hence the equation can be translated as:

The Newton’s Method can be expressed as a python function as follows: