Root of a Function

Consider a function . The point is called the root of if .

Solution of an Equation

The new function has a root at the solution to the original equation .

Given we define the Jacobian matrix as:

Linear functions are trivial to solve, as are quadratic functions if you have the quadratic formula memorized. However, polynomials of higher degree and non-polynomial functions are much more difficult to solve. The simplest technique for solving these types of equations is to use an iterative root-finding technique.

We will try out the following techniques using the function: 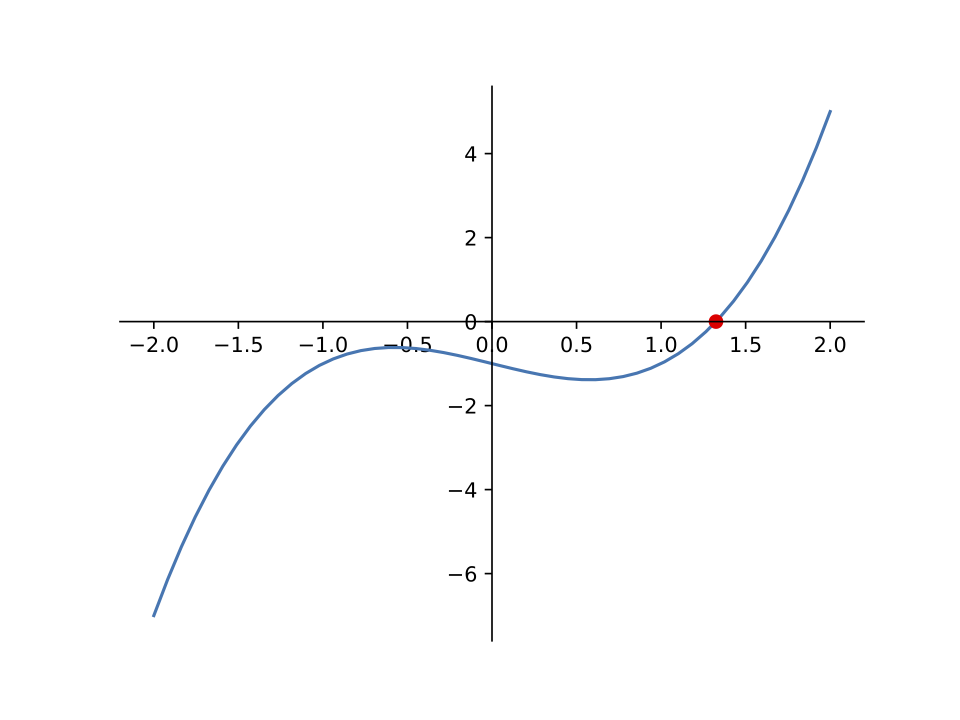 The bisection method is the simplest root-finding technique.

The algorithm for bisection is analogous to binary search:

Bisection method has linear convergence, with a constant of 1/2.

The bisection method requires us to know a little about our function. Specifically, must be continuous and we must have an interval such that

Then, by the intermediate value theorem, we know that there must be a root in the interval .

This restriction means that the bisection method cannot solve for the root of , as it never crosses the x-axis and becomes negative.

From the graph above, we can see that has a root somewhere between 1 and 2. It is difficult to tell exactly what the root is, but we can use the bisection method to approximate it. Specifically, we can set and .

Since and are both positive, we will replace with and further narrow our interval.

Since and are both negative, we will replace with and further narrow our interval.

Note that as described above, we didn’t need to recalculate or as we had already calculated them during the previous iteration. Reusing these values can be a significant cost savings.

Since and are both positive, we will replace with and further narrow our interval.

When running the code for bisection method given below, the resulting approximate root determined is 1.324717957244502. With bisection, we can approximate the root to a desired tolerance (the value above is for the default tolerances).

The Newton-Raphson Method (a.k.a. Newton’s Method) uses a Taylor series approximation of the function to find an approximate solution. Specifically, it takes the first 2 terms:

Starting with the Taylor series above, we can find the root of this new function like so:

This value of can now be used to find a value of closer to the root of :

Geometrically, is the intersection of the x-axis and the tangent of the graph at .

By repeatedly this procedure, we can get closer and closer to the actual root.

With Newton’s method, at each iteration we must evaluate both and .

Convergence only works well if you are already close to the root. Specifically, if started too far from the root Newton’s method may not converge at all.

We will need the following equations:

From the graph above, we can see that the root is somewhere near . We will use this as our starting position, .

As you can see, Newton’s Method is already converging significantly faster than the Bisection Method.

When running the code for Newton’s method given below, the resulting approximate root determined is 1.324717957244746.

The steps involved in the Secant Method are identical to those of the Newton Method, with the derivative replaced by an approximation for the slope of the tangent.

More specifically, the rate of convergence is:

This happens to be the golden ratio.

Let’s start with and .

First, find an approximate for the derivative (slope):

Then, use this for Newton’s Method:

When running the code for secant method given below, the resulting approximate root determined is 1.324717957244753.

SciPy’s newton method serves double-duty. If given a function and a first derivative , it will use Newton’s Method. If it is not given a derivative, it will instead use the Secant Method to approximate it:

Similar to root-finding in 1 dimension, we can also perform root-finding for multiple equations in dimensions. Mathematically, we are trying to solve for . In other words, is now a vector-valued function

If we are instead looking for the solution to , we can rework our function like so:

We can think of each equation as a function that describes a surface. We are looking for vectors that describe the intersection of these surfaces.

The multi-dimensional equivalent of Newton’s Method involves approximating a function as:

where is the Jacobian matrix of .

By setting this to and rearranging, we get:

Note that in practice we would not actually invert the Jacobian, but would instead solve the linear system in to determine the step.

Similar to the way we solved for in 1 dimension, we can solve for:

where $\boldsymbol{s_k}$ is determined by solving the linear system

Let’s find a root for:

The corresponding Jacobian and inverse Jacobian are:

In this example, as the Jacobian is a matrix with a simple inverse, we work explicitly with the inverse, even though we would not explicitly compute the inverse for a real problem.

When running the code for Newton’s method given below, the resulting approximate root determined is .